Unlike natural gas, coal and nuclear power fired power plants, wind farms and solar power islands do not use water to generate electricity. Of course, this apparent disparity could be a distinction without a difference because even though the electric-power industry accounts for nearly half of all water withdrawals in the U.S, all or most of the water used by the power sector eventually is returned to waterways. Even in cases where cooling towers are used instead of 'once-through cooling,' only about 2% to 3% of the water is lost through evaporation. Of coure, with the traditional electricity generators, there are water heating and intake issues related to effects on aquatic fauna that do not apply to wind farms. Unfortunately, bird kills are big concerns at wind farms. And solar power stations take up vast amounts of land. Plus, wind and solar only operate about 30% of the time and have to be backed up by traditional plants, which can operate nonstop. There are no silver bullets. But, water issues could be as important a selling point for the renewables energy industry as reducing carbon-dioxide emissions.

Tri-State Generation and Transmission Association, a utility that provides power to mostly rural areas, says it plans to build a 500,000-solar-panel project in northeast New Mexico in partnership with First Solar Inc because there's no water requirement with solar. 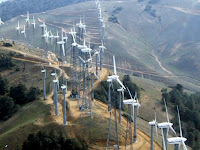 A Department of Energy study concluded that a megawatt hour of electricity produced by a wind turbine can save 200 to 600 gallons of water compared with the amount required by a modern natural gas-fired power plant to make that same amount.

In 2004, Riverkeeper Inc., an environmental organization in Tarrytown, N.Y., along with six states, sued the Environmental Protection Agency over the use of once-through cooling by as many as 500 older power plants in the U.S. The suit charges that the practice violates the Clean Water Act because it harms aquatic life and fails to utilize the best technology available, a requirement of the federal act. The case, now before the U.S. Supreme Court, stands to test how water-use issues will determine which power plants continue to operate as well as what kind of plants are built.

Nuclear plants face particular scrutiny, since they require more water than any other form of steam generation. Virginia Power, a unit of Dominion Resources, is facing a legal challenge over its right to draw one million gallons of water a minute per reactor from a man-made lake it uses to cool its North Anna nuclear power plant and into which it discharges heated water. The utility built the lake in 1978 exclusively for the plant's cooling purposes.

A group argued that heat is a form of pollution and said the state water board shouldn't have renewed the plant's water permit. Last month, a state court upheld much of the environmental group's case; the utility plans an appeal. Dominion says the man-made lake is a private
body of water and therefore shouldn't fall under the federal Clean Water Act.

AAEA disagrees with the strategy to use water use issues to try to close nuclear power plants because global climate change is the most important environmental issue facing the planet today and these plants do no emit any greenhouse gases. AAEA is awaiting the U.S. Supreme Court decision on this issue. AAEA is also participating in an adjudication of a water permit issue involving a nuclear power plant in New York.
Posted by Norris McDonald at 11:27 AM