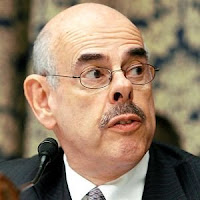 Representative Henry Waxman, chairman of the House Energy and Commerce Committee, appeared on Tavis Smiley Tonight on April 13th to discuss moving to a low carbon-energy economy and greening the ghetto. Huh? Doesn't Waxman represent Beverly Hills? He describes about how the U.S. can provide jobs while working towards energy independence. [Transcript]
The American Clean Energy and Security Act of 2009 (ACES) has four titles: 1) A clean energy title that promotes renewable sources of energy, carbon capture and sequestration technologies, low-carbon fuels, clean electric vehicles, and the smart grid and electricity transmission; 2) An energy efficiency title that increases energy efficiency across all sectors of the economy, including buildings, appliances, transportation, and industry; 3) A global warming title that places limits on emissions of heat-trapping pollutants; and 4) A transitioning title that protects U.S. consumers and industry and promotes green jobs during the transition to a clean energy economy. (More)
Congressman Henry Waxman has represented California since 1975. In January, he became chair of the Committee on Energy and Commerce, which has oversight of various functions, including energy policy, consumer protection and interstate and foreign commerce. A longtime champion of environmental and public health protection, Waxman introduced the first bill in Congress (in '92) to stabilize the climate. Prior to his election to Congress, the Los Angeles native served three terms in the California State Assembly.
Posted by Norris McDonald at 3:18 PM