We Could Use Some Help From Energy Czar Carol Browner 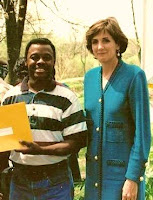 AAEA President Norris Mcdonald is pictured at right with then EPA Administrator Carol Browner in Kenilworth Park in Washington, D.C. in 1999. A decade later we sure could use her help in getting our programs included in the pending energy and climate change legislation. Maybe the energy czar could use our help too because there is rumbling in the land that the Obama administration is putting the breaks on climate change legislation because of the recession. Yet Copenhagen looms in December and midterm election campaigns will begin in earnest soon thereafter.

AAEA supports cap and trade but we oppose auctioning the allowances. Fortunately, the auction was removed from the budget proposal and consensus seems to be settling around allocating free allowances to utilities. There also appears to be consensus that legislation is preferred to the EPA regulatory route. AAEA agrees with the Obama administration in the preference for legislation.

We have a few additions to energy legislation, climate change proposals and stand alone recommendations:

House energy committee chairs Ed Markey and Henry Waxman can feel free to incorporate our suggestions into their American Clean Energy and Security Act of 2009 (ACES) [More].
Posted by Norris McDonald at 11:02 PM