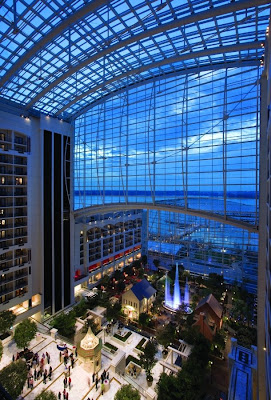 National Harbor developer Milt Peterson wants to build a gas station at the top of the hill on the front side of National Harbor just off of Indian Head Highway. Locals are dug in and will oppose it with every bone in their bodies. They see it as an insult to the original vision of that locale, which was originally supposed to house office buildings that would support upscale restaurant lunch business. Most restaurants need a strong lunch business, in addition to dinner crowds, to make a profit and to stay in business. The only other gasoline service station is just below Rivertowne, which Peterson also owns, but it is out of the way and in a, how shall we put it, less than upscale area in Oxon Hill.
Peterson spokesperson/attorney Andre Gingles recently faced the pubic and was given an earful. Our guess is that this will be an uphill battle. There isn't a gasoline island anywhere near this location and some fear it could become an East Coast stop for trucks and cars from major Interstate Highway 95. Something like two percent of America's commerce passes across the Woodrow Wilson Bridge, which is near National Harbor. The proposal to put something like 18 gasoline pumps and a convenience store at the site is controversial. We have no idea where the local government officials will come down on this issue. But although National Harbor is Prince George's County's Times Square and Hollywood Walk of Fame combined, we sense deep seated opposition to the gasoline station proposal.
Posted by Norris McDonald at 6:06 PM