Blacks do not own coal companies, do not lease mines, do not transport coal, do not own the utilities that burn it and do not own the alternative deep mining operations. Because coal is used to generate 50% of America's electricity and Blacks represent 13% of the population, we do contribute to global warming to the extent that we use this product and service. Yet are Blacks positioning themselves to create and own the wind and solar companies that could replace mountaintop removal? What about ownership of the high power transmission lines that will be needed to transport the wind and solar power? Will Blacks miss these new ownership opportunities? Blacks already do not own any of the energy infrastructure in the United States. If wind, solar, conservation and efficiency are the wave of the future, will Blacks take up ownership positions or once again leave themselves out (or be left out) of this 21st Century energy sector development?

The Obama administration is scrutinizing mountaintop coal mining and is seeking to reduce environmental damage during the proposed transition away from this practice to the efficiency, conservation, wind and solar replacement alternatives. President Obama wants to reduce moonscapes in our precious mountain areas and he wants to protect the streams that are destroyed by mountaintop removal. His (and our) challenge is to convince local and regional mountain residents that wind turbines are an attractive alternative to stripped mountaintops.

The Environmental Protection Agency recently found no significant problems with 42 of the 48 mountaintop removal applications, but it rejected six as too damaging. According to EPA, in 2001, 724 miles of stream valley had been buried, which has led the agency to apply tighter scrutiny to about 108 pending applications for mining permits. 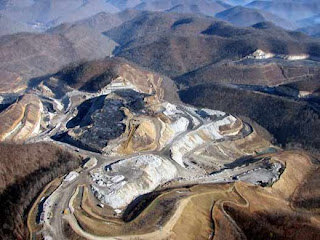 Our president, Norris McDonald, was recruited into the environmental movement by Louise Dunlap, one of the authors of the Surface Mining Control and Reclamation Act (SMCRA). Jimmy Carter recognized her work in getting this legislation passed in 1977. Yet former President Carter acknowledged that he would have preferred stricter legislation. Unfortunately, the Clean Air Act Acid Rain Program, combined with the weaknesses of SMCRA led to increased use of low-sulfur coal as an alternative to scrubber installation, thus increasing the very surface mining, and mountaintop removal (mostly in the Western states of Wyoming and Montana) that the two laws sought to mitigate. Even though transportation costs are raised, it still beat the expensive installation of scrubbers for utilities.

We point all of this out in order to illustrate that, in a global warming world that includes mountaintop removal as a threat to streams and mountain beauty, Blacks are on the sidelines as electricity consumers and not owners, producers or transporters. Emission free wind power is an easy choice for African American entrepreneurs. Yet local NIMBYs could delay such wind power entrepreneurs right out of business. (Wash Post, 6/11/09)
Posted by Norris McDonald at 10:13 AM