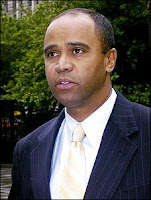 The Washington Post article on this new office states:

"The word "urban" became code for "black" and "problem-ridden."

Urban areas ARE black and problem ridden. Black-on-Black murder is the most important environmental issue facing urban black communities today. We hope that President Obama's Urban Office will make Black-on-Black a priority because this behavioral pandemic is a cancer at the core of Black America [yes there is still a black side of town in every city in America].
Posted by Norris McDonald at 4:02 PM