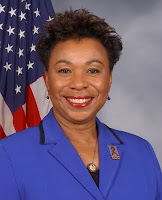 The theme of the Congressional Black Caucus (CBC) 39th Annual Legislative Conference is "Reinvest...Rebuild...Renew," and is being held at the Washington Convention Center from September 23-26. Having organized the very first energy braintrust for the CBC on behalf of the late Congressman Mickey Leland, I was amazed at the growth of energy panels. There are now seven energy (green) panels among the many other forums being conducted throughout the cavernous convention center. CBC Chairwoman Barbara Lee, right, invited me to speak at her Green Entrepreneurship Series, which is being sponsored by Mastercard, Community Loans of America, and Bank of America.

CBC Chairwoman Lee also sponsored a Green Roundtable that included EPA Administrator Lisa P. Jackson and Secretary of Energy Stephen Chu. Of course, I got off the first question about how the administration and the CBC can facilitate African American ownership of energy infrastructure, properties and products. The CBC Energy & Environment Taskforce hosted an inaugural meeting of the Green Roundtable in July to begin a discussion on building a "Green Agenda" for Black communities. This meeting served as part two of this important discussion.

Donna Brazile invited me to the forum she organized, "Social Media & Digital Content: Organizing the Masses," which featured Robert Townsend's latest film project, "Diary of a Single Mom." In addition to Townsend making a presentation, the full cast was there, including Richard Roundtree, Billy Dee Williams, Leon, Valerie Ortiz and Monica Calhoun.

CBCF YouTube Videos of Sessions
Posted by Norris McDonald at 8:38 AM