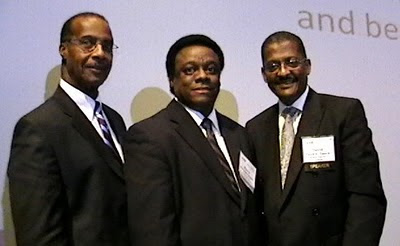 The American Association Of Blacks In Energy (AABE) and its partners held a landmark "Energy And Climate Change Summit" on Thursday, January 28, 2010 at the Heritage Center of the United States Navy Memorial in Washington, DC. The theme of the summit was "Implications & Economic Opportunities," the goal was to establish a vehicle to provide a credible voice for people of color on the issues of energy and climate change policy. The Summit focused on economic opportunities and impacts to vulnerable populations, and providing a dialogue to establish a set of principles to be presented to key policy officials in Congress, the Obama administration and other government agencies.

The summit, which was very well attended and successful in achieving its goals, was opened by Frank Stewart, President of AABE and David Owens, AABE Chair and Edison Electric Institute Vice President. Majority Whip James Clyburn was the featured speaker at the morning plenary session. Kevin Bryan, Meridian Institute, served as the facilitator of the morning and afternoon sessions. Mr. Stewart and Mr. Owens also served as stakeholder panelists.