Jesse Jackson Sr. called for a "Stimulus Part II" at a news conference outlining the goals of the 13th Annual Wall Street Project Economic Summit, which was held in New York City from January 12-15. According to Jackson, the impact of foreclosures, Depression-level unemployment in the black community, and rising healthcare costs show that the stimulus act approved by President Barack Obama left conditions rough for many on Main Street while Wall Street was heavily subsidized. The theme for the 2010 summit, “Targeted Stimulus: A Call to Equity & Parity,” focused on strategies to invest in job creation, minority businesses, and underserved communities. 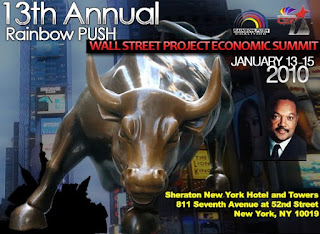 President Obama has launched his version of Stimulus Part II via his proposed Clean Energy Manufacturing Jobs Initiative, which provides a 30 percent tax credit ($2.3 billion worth) for investments in 183 manufacturing facilities for clean energy products across 43 states. Congress is considering a jobs-creation bill (Jobs For Main Street Act--H.R.2847), which includes investments and incentives backed by President Obama via his aforementioned Clean Energy Manufacturing Jobs Initiative to spur clean energy manufacturing jobs. H.R. 2847 has already passed in the House on December 16 by a vote of Passed, 217-212. The Senate will take it up when Congress returns later this month.

The Obama Administration has awarded $2 billion in “neighborhood stabilization” funding to states, cities, and communities hardest hit by the foreclosure crisis. The funds, part of 2009’s $787 billion American Recovery and Reinvestment Act. The foreclosure crisis is far from over. A report released by real estate data firm RealtyTrac showed a record 2.8 million properties received a foreclosure notice in 2009, a 21% jump from 2008 and 120% higher than 2007. High foreclosure activity is expected to continue in 2010. (Black Enterprise, 1/14/10, Black Enterprise, 1/16/10)
Posted by Norris McDonald at 9:53 PM