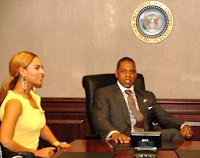 Hip Hop mogul Jay Z visited the White House this week and was photographed with his wife Beyonce and posse in The Situation Room. He met briefly with President Obama. Hip Hop Caucus President Reverend Lennox Yearwood also publicized that group's 'Green The Block' campaign at an event at the White House a few months ago. So Hip Hop is all up in the White House. Now what?

Rev Yearwood is actively working on a 'green agenda.' We see him all over Washington, D.C. and all over the nation campaigning to 'Green The Block.' His recent tour went from the deep South back to Washington, D.C. and ended in a rally on the south side of the Capitol. EPA Administrator Lisa P. Jackson spoke at the event.

Our hope is that impresario artists such as Jay Z and activists such as Rev Yearwood will synthesize their wealth, fame, tours and campaigns into African American ownership of energy infrastructure in America. We also hope that such an effort would entice other Hip Hop entrepreneurs into the energy sector as owners in all of the energy areas. (More)
Posted by Norris McDonald at 12:40 PM