First let me say that I fell in love with South Africa. I was deeply in love with China after my first visit there, and now South Africa has stolen my heart and mind. I think the source of this love, as in the case with China, comes from the loving nature of the people. I found South Africans to be dynamic and affectionate. My first hint that South Africa is a 'destination location' for African Americans was my getting to know our host, Michael Sudarkasa. He moved to South Africa 15 years 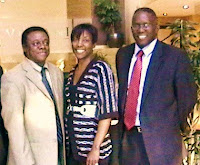 ago and is completely happy with his life there. He's a Harvard lawyer and entrepreneur. And he worked us like pack mules going up the side of a mountain. Of course, this mountain was meetings with industry representatives, government agency representatives, small business representatives and more. Paula Jackson, Communications Director for the American Association of Blacks in Energy, was part of our trio. 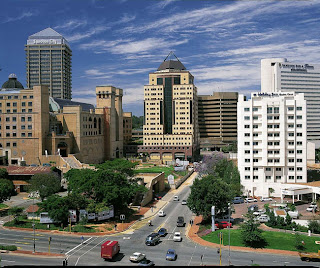 I was impressed with the development in South Africa. I could not tell that I was out of the United States. The highway ride from the airport was similar to that of the Dulles Toll Road and Route 66. Large corporations and other businesses dotted the entire length of the 20 minute ride into town. Sandton, left, is the 'Silver Spring' of Johannesburg. Just as American cities were left by the business sector, so too was this 'city' built after the fall of Apartheid. I had never heard of Sandton before my trip. Just as in China, I had never heard of Kowloon, which is a huge part of the urban sector of Hong Kong.
Johannesburg 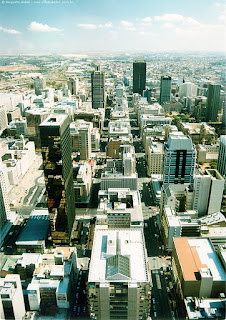 South Africa has incredible energy needs. The $3.8 billion World Bank loan for Eskom to build 4 coal plants was approved while I was there. This is the first time that South Africa has gone out to international lending institutions to finance an energy project. They will be back for more. South Africa is faced with providing electricity for 40% of its population that still does not have electricity while feeding a 4% growth rate. I was told that they need 40,000 megawatts by 2025. So the 4,000 megawatts from the World Bank loan represents only 10 percent of their needs. All of our meetings revolved around energy and environmental issues related to providing South Africa with the energy they need.

South Africa is ahead of the United States in many ways. They had a black president well before America. They already have black owners of coal mines, oil exploration and prodution companies, control over the national utility Eskom and ongoing requirements for significant black ownership of energy companies. I was pleasantly surprised to find out that South Africa is highly developed. The malls are malls just like in America. The Mandela Square is a super mall.

However, I was and am disturbed by the walls with electric fences on top that surround almost every home. Soweto reminded me of Compton. It was not the tin roofed shanties that I expected. And they do not have walls with electric fences on them surrounding their homes. I was told because of a sense of community. There is an abandoned power plant right in the middle of Soweto with an unreclaimed strip mine (gold) nearby. The 25% unemployment rate has to be reduced. Crime is a big problem too. Economic development that increases employment will reduce crime. I also have the fantasy that one day, South Africans can tear down those walls around their houses.

More
Videos
Posted by Norris McDonald at 10:55 AM