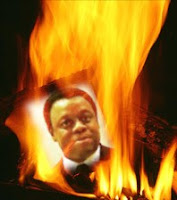 Blacks are effectively locked out of benefiting from the U.S. Department of Energy's Loan Guarantee Program.  At a 2009 Congressional Black Caucus energy forum, I asked Secretary of Energy Steven Chu about how the Department of Energy could help Blacks to get ownership of energy companies.  His response was that Blacks should buy stock.  Well I already knew that.  You could also sense the collective groan of the Blacks in the room.

What about half billion dollar loan guarantees Mr. Secretary?  Yet no Black company has the experience and infrastructure to qualify for the loans.  But some of these companies, such as Solyndra, are out of business soon after receiving half billion dollar loan guarantees [Solyndra collapsed despite receiving a $535 million Energy Department loan guarantee in 2009].  A start up could not do any worse than that.  So Secretary Chu should have said the department would be looking into loan guarantees for start-up Black-owned energy companies. I got the impression that Mr. Chu had no clue about suggesting such a thing.

I say all of that because of the current controversy related to House Oversight and Government Reform Committee Chairman Darrell Issa's (R-Calif.) attack on a potential $730 million Energy Department loan to a Russian steel company for manufacturing high strength automotive steel in Michigan.  If the Russian company Severstal North America – a subsidiary of Russian steel giant OAO Severstal – can receive public financing to re-tool and expand facilities in Dearborn, Michigan, then so should a Black-owned company receive subsidies to particiapate in energy-sector-related endeavors.

Issa argues that Severstal was already moving ahead with production plans “with apparently no need for federal financing” and also questions whether the project is even eligible under the requirements of the Advanced Technology Vehicle Manufacturing (ATVM) program. Issa also notes the wealth and connections of Alexei Mordashov, the CEO of the Russian parent company, who according to Forbes has a net worth of $18.5 billion. Issa argues the company could self-finance the project or find funding on the open market.  Even the 1% of Russia trumps the Black part of the 99% in the United States.

I complain because Blacks do not own any energy infrastructure and resources in the United States.  Now one can sit back and complain or one can try to do something about it.  But one is challenged to 'get in' when Big Boys are getting the really big supports from the public.  And those who groan at the mention of race should ask themselves if it is okay that no Blacks own energy infrastructure and resources in the USA.  If this is okay with them, then I have to dismiss their view and proceed to do whatever it takes to get equity in the energy sector.

The Energy Department announced conditional approval of the Severstal loan in July but has not given final approval. The Energy Department says the Severstal’s application is for a project that would help make American car manufacturers be more competitive as demand for lighter, more fuel efficient vehicles increases, strengthen the American steel industry and support more than 2,500 construction jobs and over 260 permanent manufacturing jobs in Michigan.

The auto loan program was authorized in a 2007 energy law (H.R. 6: Energy Independence and Security Act) that passed with wide bipartisan support and was signed by President George W. Bush.

Finally, Turner Station, an African American community in Baltimore is suffering from pollution from a nearby Severstal plant.  Not only are Blacks locked out of participating as owners in the energy sector, but then Black communities are disproportionately impacted by pollution from some of those facilities. (The Hill, 10/27/2011)
Posted by Norris McDonald at 9:31 AM