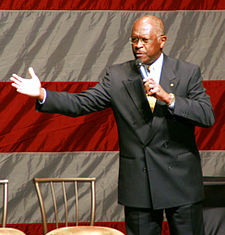 We have not read presidential candidate Herman Cain's explanation about how he or the marketplace would protect our air, land and water.  The Clean Air Act, Clean Water Act and Safe Drinking Water Act are no small matters. He would have to repeal all of those laws in order to eliminate the Environmental Protection Agency.  The late President Richard Nixon must be turning over in his grave about this Cain proposal.  Nixon signed the law that created the EPA.  Nixon also signed all of the aforementioned environmental laws.  Of course, in the Republican camp, Nixon is no Reagan.

How would Herman Cain implement the requirements of the Clean Air Act without EPA?  Relaxing regulations are one thing, but leaving air pollution mitigation completely to the marketplace would be a disaster.  Don't get us wrong, AAEA is marketplace oriented.  Just look to the smog-filled skies of China for the reality of unbridled economic development without sufficient clean air regulations.  We are still baffled too about the flip flop of both parties on Cap-&-Trade.  First it was a Republican strategy and then it was a Democratic strategy.  Now it is not a strategy at all.  But we digress.

How would Cain manage clean water permits?  Industry already self reports.  Does Cain really believe that unscrupulous companies would not maximize profits by indiscriminately dumping its waste into our waterways?  Come on Herman.  What about our drinking water plants and safe drinking water standards?  Does Herman really think the public will trust oversight of our drinking water systems to private companies?

What about toxic wastes?  Would Mr. Cain get rid of all of the regulations that control the generation, transportation and disposal of hazardous wastes?  We don't think so.

So Mr. Cain is kidding again.  Plus, we know he could never do it anyway.  The legendary President Ronald Reagan came to Washington with grandiose plans to reform and reduce government.  He didn't do it.  In fact, Bill Clinton implemented more of Ronald Reagan's plans than the Gipper ever achieved.  Herman has to get the Republican nomination first.  And then he has to defeat the best politician in the history of the United States.

AAEA is here to advise you Mr. Cain on energy and environmental issues if you are so inclined. Give us a call.  We are nonpartisan.  And stop joking around when it comes to protecting our environment.
Posted by Norris McDonald at 10:36 AM