I just finished reading "NO FEAR: A Whistleblower's Triumph Over Corruption and Retaliation at the EPA," and not only was it riveting, it took me back to those heady days of the early 1990's.  Marsha Coleman-Adebayo's story is one of tragedy and triumph.  It is tragic because a brilliant person's career was ended at the U.S Environmental Protection Agency.  It is triumphant because Marsha took on arrogance and beat it like a rag doll.  I could not be more proud of Dr. Adebayo for finally documenting her experiences at EPA during the Clinton/Gore/Browner administration.  However, my pride in Marsha is tempered by the fact that her victories did not come without a very high price and her tormentors have only been rewarded for their roles. 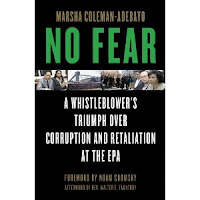 This book is very personal to me because I lived through much of it with Marsha.  I hate to say it but our two decades old friendship was incubated in the demise of her career.  I am to this day baffled as to why EPA Administrator Carol Browner did not become an early ally of Marsha, but instead chose to become her nemesis.  After all, Carol and Marsha worked closely together in EPA's participation in a global women's conference in China.  I still remember the look on Marsha's face when she informed me that Browner turned her back on Marsha's plea for support in achieving justice at the agency.  However, having been around Washington, DC for over three decades, I've seen how power affects people when they breathe that rarefied air inside of our powerful institutions. Women will turn on women and Blacks will turn on Blacks, but white men seem to always come out on top.  And the first Black president will bring an administrator whose administration was convicted of racial and sexual discrimination back into the White House as a climate czar.  But President Obama, in his inimitable political style, and probably as a result of Marsha's work, also appointed the first black woman as EPA administrator and appointed a black woman to head the EPA Office of International Affairs (source of Marsha's troubles).  Fate does seem to have a sense of humor.

Everyone should read this book because it is a textbook on not only how relationships work in powerful agencies, but also how an 'uppity' Black woman can triumph over racial and sexual discrimination when that beast raises it ugly heads.  Part of me was not necessarily looking forward to reading about the trial where Marsha won her discrimination lawsuit against EPA because I thought it would be boring, but when I dove into it, it was riveting.  I could not stop reading.  It turned out to be the most interesting part of the book.

"NO FEAR" details every step of Marsha's academic rise in obtaining an MIT Ph.D., to her unjust firing a decade after her fight began.  This book shows how even if you have the academic credentials and drive to excel at your job, your career will be destroyed if you choose to 'blow the whistle' on any issue that the institutions feel must be protected.  In this case, it was vanadium mine workers.  Marsha wanted EPA to help them and, evidently, the U.S. government valued the mineral more than the health of the miners.  Carol chose to go along with corporate/mineral/government interests and she has been wildly rewarded for her loyalty.  Marsha did not go along with the systematic poisoning of vanadium mine workers in South Africa and her career was terminated.  The sad thing is that there had to be middle ground where everyone could prosper.

Marsha's struggle is not over.  If you want to experience the most interesting literary roller coaster ride I have ever experienced, you will read Marsha's book.  Thank you Ngozi for including me on the ride (and putting me on the book cover).  I would not have missed it for anything.   Oh, and I cannot wait to see the movie.
Posted by Norris McDonald at 1:03 PM