The state chapter of the NAACP wants Virginia to keep intact a 30-year ban on uranium mining, stating that opening one of the world's largest known deposits of the radioactive ore is not worth the environmental risk. The NAACP's state conference unanimously approved a resolution opposing the Virginia Uranium project at its meeting Sunday in Richmond. The civil rights organization said the resolution is rooted in fears that poor and minority communities would be disproportionately affected if an accident occurred in mining the Southside Virginia deposit. According to Naomi Hodge-Muse, president of the Martinsville-Henry County NAACP and sponsor of the resolution:


"This is a human right. The NAACP is about human rights and environmental justice. Unemployment ranges from 12 percent to 22 percent in Danville and Martinsville, the two largest cities in Southside Virginia. Still, the mining jobs are not the answer. There is no amount of money that is worth the price of your children."

Virginia Uranium Inc. is proposing to mine the 119-million-pound deposit in Pittsylvania County near the North Carolina line. It is believed to be the largest known deposit in the U.S. and the seventh-largest in the world. 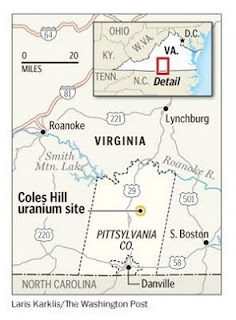 Virginia has had a moratorium on uranium mining since 1982, when the General Assembly first took up the debate over allowing uranium mining in the state. The accident at Three Mile Island several years earlier dampened enthusiasm for nuclear power and yellowcake, the leached powder from the ore that fuels nuclear power plants.

The National Academies of Science is expected to release a study in December on the impact of uranium mining statewide. While it will not recommend whether Virginia should end the ban, the General Assembly is expected to rely heavily on the report's contents in deciding whether to take up the issue in 2012.

The Sierra Club and the NAACP said the economic boost mining would deliver overshadows its potential environmental impact. According to Mary Rafferty, an organizer for the Sierra Club, "They want good quality jobs and they see a uranium mine as a deterrent to economic development."
Muse-Hodge cited a study that concluded that catastrophic flooding near the mine or the area where waste would be stored could release radioactive contaminants into tributaries that feed Lake Gaston, a source of drinking water that supplies the resort city and several other Hampton Roads municipalities. Virginia Uranium presented its own study that it said countered those findings.

(More: Coalition to Keep the Ban on Uranium Mining in Virginia Growing Statewide)