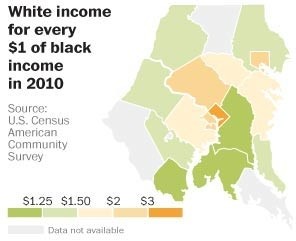 New census statistics show the income gap between whites and blacks living in the District is one of the widest in the country. That stands in stark contrast to the Washington suburbs, where the gaps have become some of the nation’s narrowest.

The per capita income for whites in the District is more than triple what it is for blacks, and the difference has only widened since 1990. In several suburbs, including Prince George’s, Loudoun and Stafford counties, incomes for blacks and whites are closer than ever, and today whites earn $1.30 or less for every $1 that blacks earn.

Demographers and city activists say the difference reflects four decades of upper- and middle-class blacks abandoning the city for the suburbs, coupled with a more recent resurgence of affluent whites moving to the District.

Nationwide, the gulf between black and white incomes is pervasive. It exists in every one of the 700 counties with significant black populations, according to census numbers that are to be released Thursday.  For every $1 in black income, white per capita income ranges from a low of $1.04 in mid-Michigan, near the capital of Lansing, to a high of $4.15 in Manhattan.

Although the Washington area’s individual jurisdictions are at one extreme or another, as a whole the region falls somewhere in the middle of all metropolitan areas. Whites in the area have per capita incomes of $1.80 for every $1 that blacks earn. The narrowest gap is in Stafford County, where white income is $1.18 for every $1 for blacks.

The disparity persists even though many Washington suburbs boast some of the highest per capita incomes for blacks in the nation. Of the top 20 counties for black income, 10 are around Washington. African Americans in the suburbs are in the vanguard of minorities who are moving closer to achieving income parity with whites. The high income levels to federal jobs, which have long been equal-opportunity positions, even during recessions.

The bifurcation can be seen in education levels reported by the census. Almost nine in 10 whites in the District have college degrees, while barely two in 10 blacks do. (Wash Post, 12/8/2011)
Posted by Norris McDonald at 8:54 AM