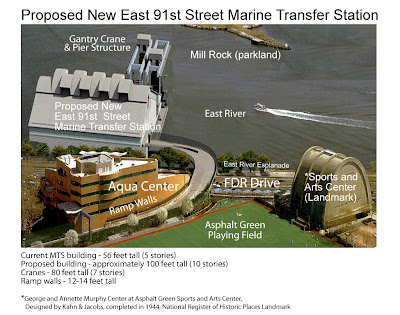 The city is planning to invest at least $125 million to retrofit the 91st Street marine trash transfer station to make it handle 4,200 tons of garbage a day. Residents have been fighting the project for years.   It sits next to an asphalt green play area.   The Manhattan’s East 91st Street Marine Transfer Station is one of two trash transfer plants the city is planning.  The other is in Queens next to LaGuardia Airport.

AAEA believes the 91st Street plan represents equity in trash handling and will reduce truck traffic in vulnerable communities.  AAEA believes the LaGuardia Airport plan poses a theat to jet traffic.  Birds are not a threat from the 91st Street station.  According to Mayor Michael Bloomberg, “A waste station was at this exact location for nearly 50 years until 2001 and it was wide open and there wasn’t a bird-strike issue for the waste station then.”

The 91st project has been in the works for the past 10 years. The plan was to construct a marine transfer facility at East 91st Street that would collect waste into containers and export it from several Manhattan community districts, rather than having all the borough's trash shipped to New Jersey.

A coalition of environmentalists, lawyers and neighborhood organizations support the 91st Street garbage facility as being necessary to bring relief to overburdened communities like Bushwick and the South Bronx that have long handled the majority of waste generated by New York City.

The North Shore Marine Transfer Station, which is being in built in College Point at 120-15 31 Avenue in College Point.near LaGuardia Airport, is expected to open in the spring of 2013 and will haul about 3,000 tons of Queens waste by barge to landfills each day.  Even an enclosed facility is going to attract birds and it simply is not worth the risk. Construction has already started on the garbage facility, located 735 yards from one of LaGuardia’s runways. The station would be built directly across Flushing Bay from a runway at La Guardia Airport. 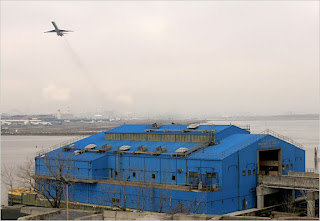 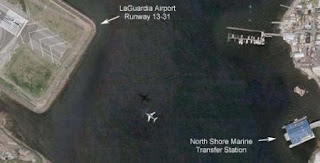