We cannot look at the holocaust of mass incarceration as someone else’s problem or something that just affects criminals. The punishment should fit the crime, and when every study imaginable says that black people are more likely to go to jail for the same crimes, this means that Jim Crow is alive and well. Something must be done at the grassroots, state and federal levels. We cannot allow this epidemic to exist any longer.
A report has been released at Meharry Medical College School of Medicine about the devastating impact that mass incarceration has on our society. The study, published in Frontiers in Psychology, is one of the most thorough examinations of the impact that mass incarceration has on the African American community. The study’s authors argue that the billions of dollars being spent keeping non-violent offenders behind bars would be better spent on education and rehabilitation. 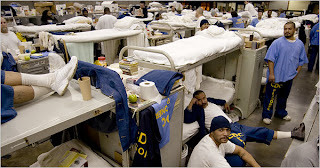 Instead of getting health care and education from civil society, African American males are being funneled into the prison system. Much of this costly practice could be avoided in the long-term by transferring funds away from prisons and into education. The study’s authors note that 60% of all incarcerations are due to non-violent, drug-related crimes. The authors also note that the cost of substance abuse in the United States is as high as half a trillion dollars per year.
Spending money on prevention and intervention of substance abuse treatment programs will yield better results than spending on correctional facilities.
Finally, the authors note that while crime rates have declined over the last 20 years, incarceration rates has climbed through the roof. The inmates occupying these jail cells are disproportionately black. In fact, the black male incarceration rate has jumped by 500% between 1986 the 2004. The authors note that, even for those who don’t abuse drugs before going to prison, the likelihood of substance abuse after prison goes up dramatically. 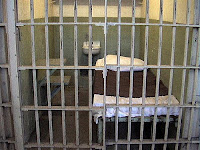 The mass incarceration epidemic affects all of us, even those who haven’t gone to prison: It affects the child who grows up without a father who has been incarcerated, the children who are bullied at school by that child, the woman seeking a husband who can’t find a good man to marry, the list goes on and on. When so many of our men are marginalized and incarcerated, this has a powerful impact on the sociological ecosystem of the black community, the same way an economy crumbles when a few large companies go bankrupt. (Frontiers in Forensic Psychology)

Posted by Norris McDonald at 10:12 AM

I believe the adventure based treatment programs have been a big help on this.