"The islands from Charleston, south, the abandoned rice fields along the rivers for thirty miles back from the sea, and the country bordering the St. Johns river, Florida, are reserved and set apart for the settlement of the negroes [sic] now made free by the acts of war and the proclamation of the President of the United States."

Section two specifies that these new communities, moreover, would be governed entirely by black people themselves: " … on the islands, and in the settlements hereafter to be established, no white person whatever, unless military officers and soldiers detailed for duty, will be permitted to reside; and the sole and exclusive management of affairs will be left to the freed people themselves … By the laws of war, and orders of the President of the United States, the negro [sic] is free and must be dealt with as such."

Finally, section three specifies the allocation of land: " … each family shall have a plot of not more than (40) acres of tillable ground, and when it borders on some water channel, with not more than 800 feet water front, in the possession of which land the military authorities will afford them protection, until such time as they can protect themselves, or until Congress shall regulate their title."

With this Order, 400,000 acres of land -- "a strip of coastline stretching from Charleston, South Carolina, to the St. John's River in Florida, including Georgia's Sea Islands and the mainland thirty miles in from the coast," as Barton Myers reports -- would be redistributed to the newly freed slaves. 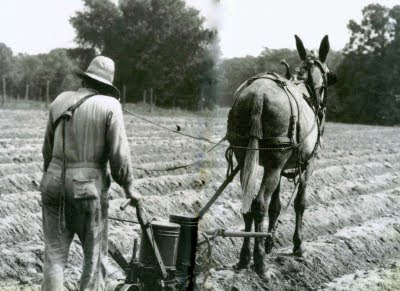 The response to the Order was immediate. The freedmen hastened to take advantage of the Order. Baptist minister Ulysses L. Houston, one of the group that had met with Sherman, led 1,000 blacks to Skidaway Island, Ga., where they established a self-governing community with Houston as the "black governor." And by June, "40,000 freedmen had been settled on 400,000 acres of 'Sherman Land.' " By the way, Sherman later ordered that the army could lend the new settlers mules; hence the phrase, "40 acres and a mule."

And what happened to this astonishingly visionary program, which would have fundamentally altered the course of American race relations? Andrew Johnson, Lincoln's successor and a sympathizer with the South, overturned the Order in the fall of 1865, and, "returned the land along the South Carolina, Georgia and Florida coasts to the planters who had originally owned it" -- to the very people who had declared war on the United States of America. (The Root)
Posted by Norris McDonald at 10:40 AM