We supported Lisa Jackson's nomination to be EPA administrator when it was announced in 2008.  I remember like it was yesterday greeting her in the Senate Environment and Public Works Committee right after her confirmation hearing. I knew she would be a great administrator.  And she proved me right.  I was also with her in her office at the EPA Headquarters in Washington, DC. on the Friday just before President Obama's Inauguration Day.

Lisa Jackson never got 'The Big Head.' I've been around Washington, DC for over three decades and have seen many come and go.  I have also observed many heads explode upon experiencing the intoxicating elixir that is power Inside The Beltway.  Not Jackson.  She's the same now as when she came in.  My guess is that she was already experienced in the ways of Washington, having worked at EPA for years.  She was also commissioner of the New Jersey Department of Environmental Protection.  It probably doesn't get much more political than that at the state level.  So she was ready for this town.  And I am very impressed that she did not let it swell her head.

I was Lisa's groupie when she started as administrator.  Actually I was making it a point to get in front of all of the energy and environmental officials in the new Obama administration.  But Administrator Jackson was at the top of my list.  I would be there on the Senate side.  I would be there on the House side.  We got to know each other a bit better via these encounters.  She invited me to meet with her early on.  And we met in her office for about 45 minutes and discussed international, national, state and local environmental issues.

I found out that Administrator Jackson and I shared a birthday (February 8th) and I gave her a really goofy card right after one of her Senate hearings.  She was a bit more controversial by now and a bit slippery.  But I handed her the card right outside of the Dirksen Senate Office Building just before she got into her chauffeur-driven town car.  It was one of those speaking cards that goofed on our getting older.  She got me back though. 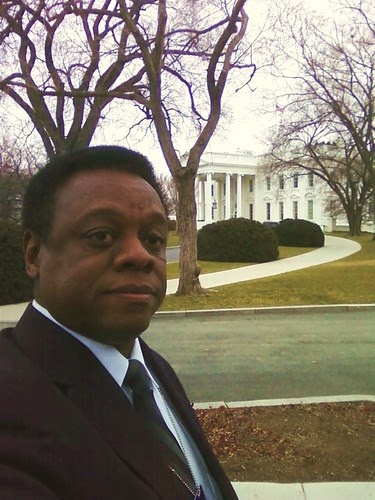 The next year I asked if we could 'do lunch' for our birthdays.  She said she had another engagement (her husband's birthday is on Feb 8th too), but could I do an early breakfast.  I said sure and wondered where we might go.  She got back to me a few days later with arrangements for us to have breakfast at The White House (West Wing Navy Mess).  We sat and ate breakfast and chatted for an hour.  It was funny when I asked if she minded if I talked while eating because it's not everyday you get this kind of quality time with the U.S. EPA administrator.  She laughed and said it was okay.  And talked with food in her mouth too.  It was my best birthday ever.  Thank you Lisa.

Adminstrator Jackson mused about whether she would stay on for a second term during that breakfast.  Although I wanted her to stay on, I am not surprised that she decided to step down.  Her sons are at a very crucial age and you can't get that time back.

I spent the afternoon with Administrator Jackson at a sustainability roundtable and environmental forum at EPA Headquarters on the Friday before the beginning of President Obama's second term.  She was the same Lisa Jackson at this forum as she was at that Senate confirmation hearing.  She made me feel real special on this day too.  She went out of her way to arrange for us to take a picture in her office.  I could see how busy she was when I walked in as she was wrapping up her tenure as administrator.  We took the photo and shared a hug.  We remain in contact.
Posted by Norris McDonald at 1:57 PM