The Supreme Court struck down Section 4 of the Voting Rights Act (VRA) on Tuesday, the provision of the civil rights law that designates which parts of the country must have changes to their voting laws cleared by the federal government or in federal court.

Section 4 of the VRA creates a formula that determines what states should be subject to Section 5, which requires states to submit any changes to election or voting laws, or alterations of state legislative or congressional district lines, to the Justice Department for approval. (That process is commonly known as pre-clearance.) That formula was — until today — based on:

b) whether less than 50 percent of eligible voters were registered to vote by November 1964. In essence, states and counties with a history of racial discrimination were required to seek pre-clearance.

The court did not rule on Section 5 of the Voting Rights Act, the preclearance requirement itself, which requires those affected states to have changes to their voting laws cleared by the Justice Department or a federal court in Washington, D.C., before they go into effect. Rather, the court ruled that the current formula that determines which states are covered by Section 5 is unconstitutional, effectively eliminating Section 5 enforcement. 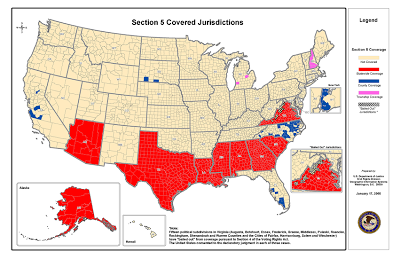 The 5-4 ruling was authored by Chief Justice John Roberts and joined by Justices Antonin Scalia, Anthony Kennedy, Clarence Thomas and Samuel Alito. The court ruled in Shelby County v. Holder that “things have changed dramatically” in the South in the nearly 50 years since the Voting Rights Act was signed in 1965.  (Huffington Post, 6/25/2013, Wash Post, 6/25/2013))
Posted by Norris McDonald at 11:56 AM