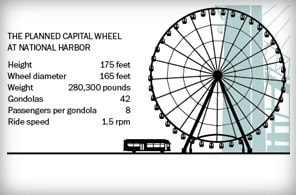 Scale of the planned ferris wheel

Peterson envisions the attraction, easily visible from flights arriving at or departing from Reagan National Airport, becoming as much a part of region’s skyline as the Washington Monument or U.S. Capitol. In mid-2016, it will be joined by a $925 million MGM resort and casino.   The attractions will be part of the $4 billion playground known as National Harbor, seven miles south of the District in Prince George’s County.

AAEA supports the Capital Wheel.  The Army Corps of Engineers will have to issue a permit for the ferris wheel.
Peterson borrowed the idea from Paris, where he visited the 200-foot Roue de Paris with his wife in 2007. His 17-story version, the Capital Wheel, is proposed to being built on a 770-foot-long pier extending into the Potomac. It will have 42 gondolas equipped with sound systems, air conditioning and heating. Each gondola will fit about eight people, who will pay $15 each for two revolutions. He expects between 600,000 and 800,000 visitors to ride the Capital Wheel the first year.

According to Jon Peterson, Milt’s son and the principal of the family’s real estate empire, the Peterson Cos:


“When people fly into National, they are going to be saying: ‘Holy cow. Look at that. I want to go there.’ This will just solidify that we will be the place to be in the Washington area. This just adds another item to our bag of tricks.”

The company manufacturing the Capital Wheel, Chance Rides of Wichita, Kan., has produced dozens of amusement park Ferris wheels.  As with the Gateway Arch in St. Louis or the Eiffel Tower in Paris, the wheels provide a different view of a city for visitors.  The Capital Wheel will feature a VIP cabin that can be rented for weddings or celebrations and — at a cost of $1 million — special-effects lighting that can change colors to suit the season or holiday. The Wolfgang Puck restaurant chain will provide seasonal concessions at the base of the ride.  (Wash Post, 115/2014)
Posted by Norris McDonald at 6:35 PM