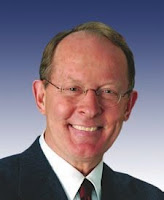 The bill would effectively end mountaintop removal by amending the Clean Water Act to prohibit the dumping of mining waste in streams. It would allow other types of open-pit, surface mining.

Alexander has introduced legislation with Sen. Thomas R. Carper (D-Del.) to reduce the sulfur, nitrogen and mercury emissions of coal-burning power plants, which provide about 60 percent of Tennessee's power. Alexander supports coal and has described it as "an essential part of our energy future," and he has pushed for "a mini-Manhattan project" for research into carbon capture and sequestration to reduce greenhouse gas emissions from coal plants. Alexander is also a big proponent of nuclear power, which provides a third of Tennessee's energy. He also supports wind energy in general, but opposes proposals for wind farms in the Appalachian Mountains. (Wash Post, 7/26/09)
Posted by Norris McDonald at 12:09 PM