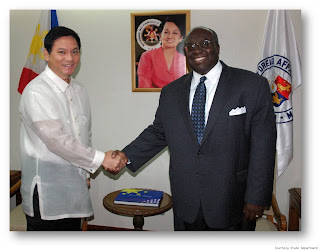 Ambassador Thomas, in the dark suit at right) served most recently as a Special Assistant to the Secretary and Executive Secretary of the State Department. He joined the Foreign Service in 1984, and served as Director for South Asia at the National Security Council in the White House from 2001 to 2002. He served as United States Ambassador to Bangladesh from 2003 to 2005.

His other postings include: New Delhi, India; Harare, Zimbabwe; Kaduna, Nigeria; and Lima, Peru. He has served as Senior Watch Officer, Deputy Director, and Director of the State Department Operations Center, Special Assistant to the Undersecretary for Political Affairs, and Staff Assistant to the Assistant Secretary for African Affairs. (Black Voices, Black Spin, 4/21/2010)

Posted by Norris McDonald at 7:51 AM