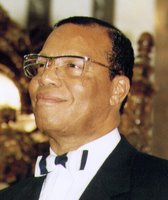 Nation of Islam leader Minister Louis Farrakhan supports nuclear power - - at least in Iran. We guess this means he supports the use of the technology in the U.S. too. We hope Minister Farrakhan does not support Iran's quest to develop a nuclear bomb. That is clearly what they want and U.S. intelligence knows Iran is using the commercial power angle as a Trojan Horse for their real aspiration - - development of nuclear bombs to use on Israel or the U.S. Minister Farrakhan should be concerned that such a bomb might be used in Chicago. But we digress.

Although we are sure that Exelon and the rest of the nuclear power industry will not be calling on Minister Farrakhan for his support, it should not hurt to provide some facts about nuclear power in his home state. Illinois ranked 1st among the 31 States with nuclear capacity and 48% of the state's electricity is produced by nuclear power plants. There are 6 operating nuclear power plants in Illinois: Braidwood, Byron, Clinton, Dresden, LaSalle, and Quad Cities. With the sole exception of the single-unit Clinton plant, each of these facilities has two reactors. Exelon is the owner of 5 of those 6 plants. The origin of all of the commercial and military nuclear industries in the world can be traced back to December 2, 1942 at the University of Chicago when a team of scientists under Dr. Enrico Fermi initiated the first controlled nuclear chain reaction. (Source: EIA)
Posted by Norris McDonald at 8:18 PM