Damu Smith Had to Die to Get in The Washington Post 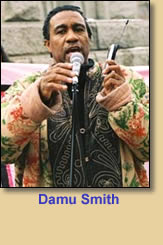