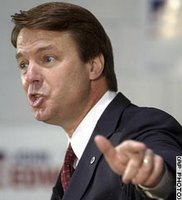 The jury is out on presidential candidate John Edwards. Although he was a cosponsor of the McCain/Lieberman Climate Stewardship Act, and the subsequent Climate Stewardship & Innovation Act, which included significant support for nuclear power, his specific position on nuclear power is unclear. He missed the vote on the bill - not that it would have made a difference. The ultimate vote was 43-55 against but every little bit helps. He was busy running as John Kerry's running mate for the presidency in 2003 at the time.

Al;though he was out of the Senate for the Energy Policy Act of 2005, he did not support previous versions of the legislation and considered it a giveaway to energy companies, saying that "Republicans wrote this energy bill in secret, and they wrote most of it simply to serve the energy companies, not the American people." This is not a good sign. The EPAct contained significant support for nuclear power. We are sure he will directly address this issue in the future and hopefully, if he is serious about mitigating the effects of global warming, he will support nuclear power because it does not emit any greenhouse gases and does not emit smog forming gases.

Update: On the Feb 4 broadcast of Meet the Press, John Edwards said he opposes Yucca Mountain and believes the waste should be stored at the power plants where it is produced. Edwards is quickly moving to the opposition column. Then again, Nevada, location of Yucca Mountain, is one of the earliest primaries. (More)

Posted by Norris McDonald at 1:09 PM