Mercury is used in a variety of light bulbs. Mercury is useful in lighting because it contributes to the bulbs' efficient operation and life expectancy. Fluorescent and other mercury-added bulbs are generally more energy efficient and last longer than incandescent and other equivalent forms of lighting. While the bulbs are being used, the mercury within them poses no health risk.

Fluorescent lamps operate at a very low gas pressure. They produce light when an electric current passes between two electrodes (also called cathodes) in a tube filled with low-pressure mercury vapor and inert gases, such as argon and krypton. The electric current excites the mercury vapor in the tube, generating radiant energy, primarily in the ultraviolet (UV) range. The energy causes a phosphor coating on the inside of the tube to "fluoresce," converting the UV light into visible light. Changing the composition of the phosphor powder inside fluorescent tubes changes the spectrum of light produced. Mercury is present in the lamp in both the phosphor powder and in the vapor.
Figure 1 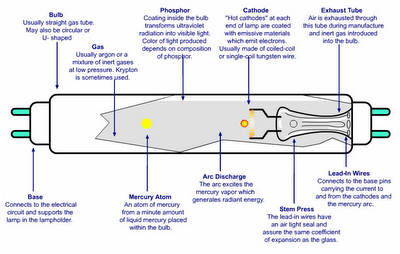 Figure 1: Illustration of the components of a fluorescent lamp and how they work
Photo Source: Northeast Lamp Recycling, Inc.

Fluorescent lamps require a ballast, which is a device used to provide and control the voltage in the lamp, and stabilize the current in the circuit. Fluorescent lamps are more energy efficient than incandescent light bulbs of an equivalent brightness because more of the energy input is converted to usable light and less is converted to heat. They also have a longer lamp life.

Depending on the type of fluorescent lamp, they can contain a wide range of mercury, from greater than 0 up to 100 milligrams (mg). According to the National Electrical Manufacturers Association (NEMA), about half of the fluorescent lamps manufactured by their members and sold in the U.S. contain 5 to 10 mg of mercury; while a quarter contain 10 to 50 mg.

Compact fluorescent lamps (CFL) use the same basic technology as linear fluorescent lamps, but are folded or spiraled in order to approximate the physical volume of an incandescent bulb. Screw-based CFLs typically use "premium" phosphors for good color, come with an integral ballast, and can be installed in nearly any table lamp or lighting fixture that accepts an incandescent bulb. Pin-based CFLs do not employ integral ballasts and are designed to be used in fixtures that have a separate ballast. Both screw-based and pin-based CFLs are used in commercial buildings. Residential use of these types of bulbs is growing because of their energy efficiency and long life.

Individual CFLs generally contain less than 10 mg of mercury, with a significant portion (two-thirds) containing less than 5 mg. A small percentage of CFLs contains between 10 and 50 mg of mercury.