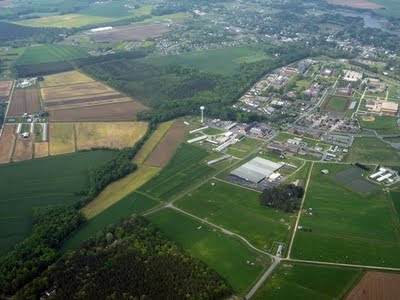 The University of Maryland Eastern Shore, right, is building 20 acres worth of photovoltaic panels, the largest solar farm in the state. The 2.1-megawatt system, to be built by Beltsville-based SunEdison on the 745-acre campus, will generate electricity for the 4,100-student campus. The solar farm, about the size of 22 football fields, should help stabilize electricity costs for the historically black university. The photovoltaic system should furnish about 10 percent to 15 percent of the university's electricity, might give the school leverage in negotiating a better deal for the rest of its power.

Getting electricity from the sun should displace more than 100 million pounds of climate-warming carbon dioxide over the next 20 years that a coal-burning power plant would otherwise emit to keep the lights on on campus. The university project will nearly double the state's solar generating capacity of about 3 megawatts. The next largest is a roughly 1 megawatt photovoltaic system installed by Constellation Energy last year on the roof of McCormick & Co.'s mill and distribution center in Hunt Valley.

The university's annual electricity expenses increased by more than $1 million a couple of years ago when rates shot up by 50 percent, so they began negotiating with SunEdison. A 2-megawatt solar farm normally would cost about $12 million to build, but the company offered to finance it so the university would not have to pay anything upfront. In return, the school signed a 20-year agreement to pay SunEdison for the electricity generated at a fixed but gradually rising price. School officials say it's a good deal for them. The initial rate is 8.75 cents per kilowatt-hour, well below the 9.9 cents the university now pays. After the first year, the charge will rise 2 percent annually, but that escalation is reasonable because electricity costs historically have been rising 5 percent a year in the state.

Such no-money-down "power purchase agreements" have helped overcome the intimidating costs of installing solar systems. The company is able to do it with the help of federal tax credits worth up to 30 percent of the construction cost. Solar projects get a boost in states like Maryland, where they're able to sell "renewable energy credits" to power companies, which are required to generate a certain percentage of their electricity from renewable sources like wind, solar and hydropower.

Nellis Air Force Base near Las Vegas boasts the largest photovoltaic system in the nation for now, a 14-megawatt array spread across 140 arid Nevada acres. A batch of much larger ones are in the works. (Balt Sun, 9/8/09)
Posted by Norris McDonald at 9:17 AM