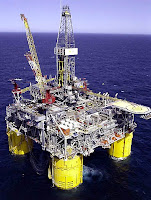 China National Offshore Oil Corp. (CNOOC) and the Ghana National Petroleum Corp. (GNPC)are competing with Exxon Mobil Corp in bids for a stake in a very large offshore oil discovery off the Ghana coast, which is in West Africa. Exxon Mobil made a $4 billion offer and CNOOC is challenging with a rival bid. CNOOC is backed by the Chinese government and its chances of winning the bid are increased by partnering with the domestic oil company.

Exxon and CNOOC are vying for Kosmos Energy's stake in Jubilee, an offshore oil discovery that is estimated to hold 1.8 billion barrels of oil. Jubilee is one of the largest oil discoveries in recent years and holds the type of light, sweet crude oil that is most sought after by global markets. Dallas-based Kosmos told bidders by letter it had "entered into an exclusive binding agreement" with Exxon to sell its 23.5% stake in Jubilee. Kosmos is partly owned by private-equity firms Blackstone Group LP and Warburg Pincus. In addition to Kosmos and GNPC, Tullow Oil PLC and Anadarko Petroleum Corp. own sizable stakes in the field, making it unclear what company would become operator of the field. (WSJ, 10/12/09)
Posted by Norris McDonald at 11:51 AM