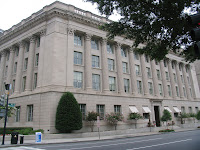 AAEA President Norris McDonald, right, attended a forum at the U.S. Chamber of Commerce that included presentations from delegates from the African Union (AU). The delegates are traveling to Washington, D.C. on an official visit with the State Department. The forum featured the members of the business community and NGOs in a discussion on the role the AU plays in American trade and investment on the African continent. The meeting was held in the Herman Lay Room and was followed by a networking reception in honor of the commissioners.

Ambassador of the United States of America to the African Union Michael A. Battle (in background in photo) spoke about the "America Involvement in the African Union." The keynote address was given by African Union Committion Chairperson Jean Ping. There were two panels:

Both panel moderated by: Gregori Lebedev, Chairman, CIPE and Senior Advisor to the President, U.S. Chamber of Commerce

Opening and Closing remarks were given by Scott Eisner, Executive Director of the Africa Business Initiative, U.S. Chamber of Commerce.
Posted by Norris McDonald at 7:51 PM