Contrary to prior testimony from other rig leaders and BP's drilling engineer that tests gave no reason for concern and conditions were safe for the Deepwater Horizon to displace heavy drilling mud the evening of April 20, the rig's subsea supervisor testified Friday that workers were confused by some test results that showed possible leaks in the well.

Christopher Pleasant, the man in charge of the blowout preventer and other well systems on the sea floor, said he was part of lengthy discussions about fluid losses during a negative pressure test about four hours before the accident.
Christopher Pleasant, a subsea supervisor
with Transocean, swears in
before testifying at the Deepwater Horizon
joint investigation hearing, May 28, 2010

In a negative pressure test, the well head is shut off using annular valves in the massive blowout preventer device on the sea floor, and workers measure whether pressure causes any mud to come up to the rig from the marine riser that runs down to the well.

Pleasant said when he began his shift that day, he went to the drill floor and found a tool-pusher, one of the main drilling crew, discussing results of the negative pressure test with BP's top official on the rig. He said the tool-pusher was concerned that barrels of mud had leaked out during the pressure test. The workers disagreed about where the mud had been lost.

testifies at the Deepwater Horizon joint investigation hearing, May 28, 2010 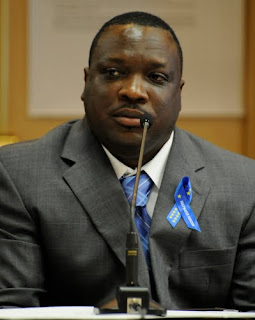 Drillers were "unsatisfied" with the negative test, which returned 15 barrels of mud, rather than the ideal of no mud released. And yet, the top drilling official on the rig, an Offshore Installation Manager and BP's well designer on shore testified previously that they believed the pressure tests were successful and no cause for concern. (Nola.com, 5/28/10, C-SPAN Video)

Posted by Norris McDonald at 12:41 AM