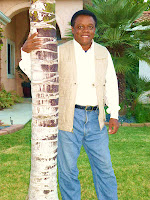 Lisa P. Jackson is the best administrator in the history of the U.S. Environmental Protection Agency.  President Obama must keep her in that post to assure environmental protection in the United States.  Not only is she equipped to synthesize the myriad environmental regulations into a cohesive green agenda, she does it with a pleasant disposition that even her opponents appreciate.

I sincerely hope that Administrator Jackson wants to continue as EPA chief.  It was a very tough four years and I watched as she held her ground in testifying before very hostile Congressional committees.  Administrator Jackson also traveled the country and the world as the nation's top environmental cop.

You know she was effective because both industry and environmentalists complained that she was either doing too much or not enough.  That strikes me as bringing a balanced approach to environmental protection. 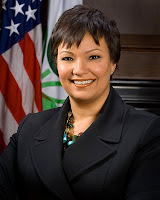 Industry has initiated litigation to block the implementation of many of these regulations.  Environmentalists have complained that Administrator Jackson has not been aggressive enough in implementing these and other regulations.  Again, I think she must be doing something right if the opposite poles are complaining about implementation.

President Obama, please keep Lisa Jackson.  Administrator Jackson, the country needs you.  I understand the sacrifice this places on you and your family and I deeply appreciate your service.  I respectfully request that you give us four more years.

Posted by Norris McDonald at 6:13 PM