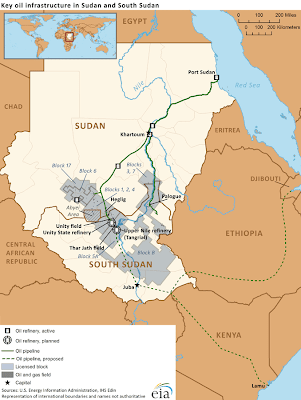 South Sudan gained independence from Sudan in July 2011. Most of the oil is now produced in South Sudan, but the country is landlocked and remains dependent on Sudan because it must use Sudan's export pipelines and processing facilities. In early 2012, South Sudan voluntarily shut in all of its oil production because of a dispute with Sudan over oil transit fees.

Following South Sudan's secession, Sudan requested transit fees of $32-36/barrel (bbl) in an attempt to make up for the oil revenue loss, while South Sudan offered a transit fee of less than $1/bbl.  After nearly 15 months of intermittent negotiations, South Sudan restarted oil production in April 2013. Despite the progress that has been made to reconcile differences, several unresolved issues remain and production may be curtailed again in the future.

According to the Oil & Gas Journal (OGJ), Sudan and South Sudan have 5 billion barrels of proved crude oil reserves as of January 1, 2013. According to BP's 2013 Statistical Review, approximately 3.5 billion barrels are in South Sudan and 1.5 billion barrels are in Sudan. The majority of reserves are located in the oil-rich Muglad and Melut basins, which extend into both countries. Oil is transported through two main pipelines that stretch from the landlocked South to Port Sudan. Because of civil conflict, oil exploration prior to the 2011 independence was mostly limited to the central and south-central regions of the unified Sudan.

Natural gas associated with oil fields is mostly flared or re-injected. Despite proven reserves of 3 trillion cubic feet, gas development has been limited. In 2010, the unified Sudan flared approximately 11.8 billion cubic feet of natural gas, according to the latest data from the National Oceanic and Atmospheric Administration (NOAA), which represents about 0.2 percent of the total gas flared globally. 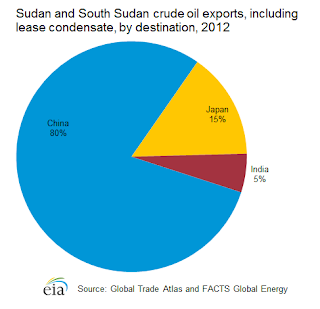 Sudan and South Sudan export the Nile and Dar blends mostly to Asian markets. According to estimates based on data from Global Trade Atlas and FACTS Global Energy, total crude oil exports, including lease condensate, averaged around 337,000 bbl/d in 2011.

China imported 260,000 bbl/d from Sudan in 2011, which accounted for 5 percent of total Chinese crude imports, according to FACTS Global Energy.

ELECTRICITY GENERATION.  The unified Sudan generated 8.1 billion kilowatthours (KWh) of electricity in 2010. Almost all was generated from oil (3.8 KWh) and hydroelectricity (3.8 KWh), with the remaining 6 percent from biomass and waste (0.5 KWh). Although power generation almost tripled between 2000 and 2010, millions of people are still without access to electricity. According to the latest 2009 estimates from the International Energy Agency (IEA), about 36 percent of the population had access to electricity, higher than the regional average for Sub-Saharan Africa, which was almost 31 percent. (DOE-EIA)
Posted by Norris McDonald at 5:08 PM