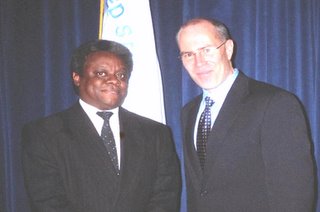 I have met with Dr. George M. Grey and I attended his swearing in ceremony as the new EPA Assistant Secretary for Research & Development. He has a perfect family with a beautiful wife and wonderful 10-year old son and 8-year old daughter. And on top of all of that he appears to be a very nice guy. I like George Grey. But the important question is: Will he do anything revolutionary during his tenure in the nation's capital, or will he just blend into the scenery at EPA?

Dr. Grey, we again respectfully request that you sponsor a meeting among your department, the EPA International Activities Office and The Bill & Melinda Gates Foundation to discuss the feasibility of using DDT to end malaria in African countries. As you are aware, malaria kills an estimated 1.2 million people a year worldwide and 2,000 African children every day. Although the Gates Foundation wants to 'study' new approaches, there is a cost-effective and mostly environmentally benign solution available right now: DDT. We should be using it today. And just as we did in America, end its use tomorrow after malaria has been eliminated. Posted by Norris McDonald
Posted by Norris McDonald at 1:51 PM