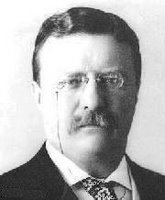 President Theodore 'Teddy' Roosevelt would reject the philosophy of environmental justice because he was a racist. Although he is considered to be the first environmentalist because he issued executive orders setting aside hundreds of millions of acres of national forests, water reserves and wildlife refuges, he also refused to acknowledge the important and courageous role played by black troops at the Battle of San Juan Hill because of his racist beliefs about blacks.

Modern environmentalists revere Teddy Roosevelt as a great hero. Although we acknowledge Roosevelt's contributions to conservation, we reject him as any kind of hero because of his racism. Many environmental groups today provide a valuable service by working to protect the environment, but also reflect the same racism exhibited by Teddy Roosevelt. Most of these groups do not hire blacks in professional positions and often promote policies that are detrimental to black communities (See AAEA Diversity Survey).

He did not truly believe that blacks were the equals of whites, or that they could be integrated into the American social fabric. He generally accepted the prevailing idea that all nonwhites were less capable of self-rule and significant advancement in culture and science in comparison to whites. He agreed with and enthusiastically endorsed the notion that nonwhites entailed little more than a "burden" which the white races of the world must carry as part of their Christian duty. This sense of racial superiority tainted his attitudes toward blacks...

Posted by Norris McDonald at 10:30 AM