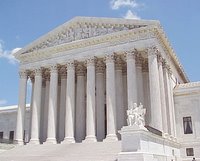 Although mainstream environmental groups will bemoan any hint of a retreat on wetlands protection, the Supreme Court put reasonableness back into the wetlands title of the Clean Water Act. It had gotten to the point where any temporary puddle was being used to stop environmentally benign development projects. Wetlands are a pollution sponge protecting out rivers, creeks and streams. We treasure wetlands and work as hard as any group to protect water quality. However, extremism hurts the legitimate protections provided by Section 404 of the 1972 Clean Water Act. We also treasure appropriate development and refuse to allow the wetlands statute to be misused to promote a BANANA (Build Absolutely Nothing Anywhere Near Anything) agenda. AAEA presented testimony before the Maryland Department of the Environment that illustrated such potential abuse of intermittent nontidal streams and intermittent nontidal wetlands provisions for the $2 billion National Harbor Project in Maryland.


In a 5-4 split decision, the Supreme Court ruled on June 19, 2006 that federal protection under a proper interpretation of the Clean Water Act requires that a wetland needs to have a "significant nexus" to a body of water that is actually navigable. Justice Kennedy, writing for the majority, noted that "any specific case was largely a technical and scientific judgment on which courts should defer to the federal regulators." Justice Scalia, writing for the minority partially concurred, stating that the Army Corps of Engineers "stretched its authority under the Clean Water Act "beyond parody" by regulating land that contained nothing but storm sewers, drainage ditches and dryarroyos in the middle of the desert...the agency had trampled on state authority by exercising a scope of discretion that would befit a local zoning board. The only wetlands properly subject to federal jurisdiction are those with a continuous surface connection to actual waterways, so that there is no clear demarcation between 'waters' and wetlands...those that are relatively permanent, standing or flowing." The decision also sends the cases back to an appeals court.
Posted by Norris McDonald at 8:22 AM