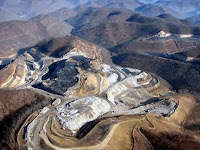 Should blacks own coal mines in a global warming world? It is a question we are asking in many forums. We always get interesting answers. Mainstream environmentalists never address black ownership of traditional energy industries even though this sector powers America. They insist that we restrict ourselves to conservation, efficiency and renewables. To be accepted, one must conform without complaint. And then there's us.

President Obama has a conundrum when it comes to mountaintop removal. It is less expensive and safer than deep mining. Moveover, there are coal mining jobs at stake and windmill construction jobs have not yet provided an alternative source of employment. Neither has construction of photovoltaic panels. Plus, coal is used to provide 50% of America's electricity. President Obama cannot close these coal extraction operations without threatening thousands of jobs and possibly causing blackouts nationwide. There is also the safety issue.

Unscrupulous companies have given mountaintop removal a bad name and their failure at promised reclamations makes us want to oppose the practice in favor of deep mining. Unscrupulous companies have scarred these bucolic mountain ranges and allowed toxic waste to pollute streams and valleys. Yet the thought of sending miners into those caves gives us pause. We are sure President Obama and EPA Administrator Lisa P. Jacksonhave given serious consideration to all of these issues. Yet, the jobs, safety and electricity reliability issues are probably why EPA approved 42 out of the 48 mine projects it had announced reviews for back in March. About two dozen ot these permits were for mountaintop removals.

The EPA has the authority to block mountaintop removal under the Clean Water Act. But if the agency raises no objections, the final decision on projects is made by the Army Corps of Engineers, which historically has approved mountaintop mining. Of course, EPA is still reviewing six major pending mountaintop removal projects in West Virginia, Kentucky and Ohio. We hope some general thought will be given to the ownership issue. AAEA intends to continue to raise it.

Although it is being reported that the Obama White House has apparently disappointed mainstream environmentalists, those same environmentalists continually disappoint us by not promoting minority ownership of traditional energy infrastructure. President Obama has no more betrayed them than they betray minorities by ignoring their ownership needs. The minority employment practices of the mainstream environmental groups are also much worse than coal mining companies. So we are conflicted too, because we want to outright oppose all mountaintop removal, but the coal mining industry and the mainstream environmental movement evidently want to keep us on the sidelines cheering for their teams while we have no equity in their respective operations. (L.A.Times, 5/31/09)
Posted by Norris McDonald at 11:21 AM