The Blacks of BP and Transocean

Darryl Willis, left, is Vice President for Resources at BP America and is the head of BP Claims Process. He testifies on Capitol Hill and is the face of BP's TV claims commercials. Some are praising Mr. Willis' performance and critics complain that they 'send out a black man' when they get in trouble. There is also criticism that while Mr. Willis is describing how claim payments are moving smoothly, numerous people in the Gulf area are complaining about the slowness of the BP claims process. Now that President Obama has established a $20 billion dollar escrow account to speed up the claims process, it will be interesting to see what happens with Mr. Willis. let us just hope that claims are paid swiftly. Livelihoods are at stake. 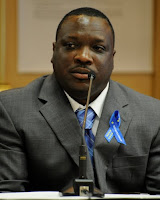 Christopher Pleasant, left, a subsea supervisor with Transocean, presented testimony before the Deepwater Horizon joint investigation hearing on May 28, 2010. Chris Pleasant, the man in charge of the blowout preventer and other well systems on the sea floor, said he was part of lengthy discussions about fluid losses during a negative pressure test about four hours before the accident. Drillers were "unsatisfied" with the negative test, which returned 15 barrels of mud, rather than the ideal of no mud released. And yet, the top drilling official on the rig, an Offshore Installation Manager and BP's well designer on shore testified previously that they believed the pressure tests were successful and no cause for concern. Mr. Pleasant was under oath and appeared to be very straightforward in his testimony. That might not serve him well professionally going forward.

AAEA is concerned that of the more than 4,000 offshore oil wells in the Gulf of Mexico, none of the leases are held by black-owned companies. We appreciate that professionals such as Messrs. Willis and Pleasant work for major oil companies and drilling rig firms, but Blacks should be lease holders and rig owners as well. Blacks in Government (BIG) have also raised the issue of few to no blacks in MMS management positions overseeing offshore drilling.
Posted by Norris McDonald at 11:04 PM