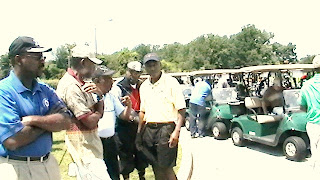 This annual golf tournament is named in honor of the late John Chambers, an original member of the Washington Government Relations Group (WGRG) and one of its first presidents. The tournament benefits the WGRG Foundation, which offers fellowships to deserving college students looking to pursue a career in Government Relations. John Rosenthall is the tournament organizer, which was held on the South Course at Andrews Air Force Base.
Joan Kaczor after hitting 150 yard Eagle 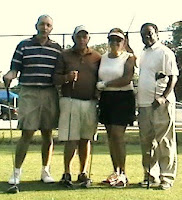 The WGRG is an organization dedicated to the enrichment of African-American government relations professionals. As a non-partisan, independent, volunteer association, their members represent a diverse cross section of corporations, financial institutions, law firms, trade associations and non-profit organizations on various policy matters in the state, federal, and international arena. The WGRG helps foster both professional and social advancement amongst its membership through a variety of regularly scheduled educational programming and events that bring together stakeholders and key leaders from the public and private sectors.

Additionally, the WGRG has a non-profit charitable giving arm, the WGRG Foundation, which, among other efforts, helps fund the Terri Grier Memorial Fellowship Program for African--American students in their final year of undergraduate or graduate study in political science or public/government affairs.
Posted by Norris McDonald at 9:41 PM