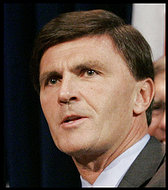 Congratulations to Maryland Governor Robert Ehrlich, left, for getting the Intercounty Connector (ICC) approved. The much needed project has been languishing for decades. Governor Ehrlich announced federal approval of the project today and construction is expected to begin this Fall. The $2.4 billion ICC is an 18-mile east-west highway linking I-270 in eastern Montgomery County to I-95/US 1 corridors in northwestern Prince George's County. The Washington Metropolitan Area is finally starting to catch up on its transportation infrastructure needs. Now if we can get the subway system linked around the I-495 Beltway and an outer beltway, this region will be second to none and travel times will put families together faster.

The approval by the Federal Highway Administration was granted following extensive review of the project’s environmental impact study and public comments. AAEA presented testimony at one of the hearings. The Federal Highway Administration approved the State’s preferred alternative, Corridor 1, which is a six-lane controlled-access highway that is the southern of the two proposed corridors.
Posted by Norris McDonald at 7:33 PM