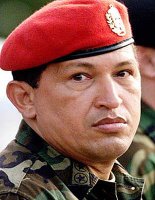 Bolivian President Evo Morales, left, nationalized his country's oil and gas reserves in a May Day surprise last week. Bolivia has gone back and forth between privatization and nationalization for decades, but the country has neither the capital nor the expertise to operate Yacimientos Petroliferos Fiscales Bolivianos (YPFB) without foreign help. Of course, Venezuelan President Hugo Chavez, right, supports the nationalization by Bolivia and has pledged financial and technical support. Brazil, Spain and France have poured $4 billion into Bolivian gas production and are livid. All investements from these countries have been suspended. Natural gas is the main hydrocarbon produced by Bolivia and its difficult transport could make it hard to market without foreign cooperation. Natural gas is also available from many countries.

Chavez plans to raise $1 billion in revenue per year by imposing a new tax on companies extracting oil from Venezuela. Companies affected include Exxon Mobil Corp, Chevron Corp, ConocoPhillips, Total, BP PLC and Norway's Statoil ASA. Chavez and Morales believe the oil companies have been exploiting their countries' vast oil and gas reserves. Of course, they could not have developed these resources without the big oil companies. The U.S. gets about 15 percent of its oil imports from Venezuela.
Posted by Norris McDonald at 11:27 AM