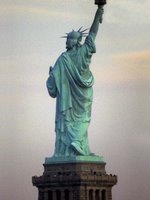 Although we do not believe a wall would be environmentally damaging to flora, fauna or folk, it just has that negative image of the Berlin Wall. We need a standardized process for all immigrants and we should stick to it. If Mexicans are just coming to America to make some money, then maybe President Bush's 'Guest Worker' proposal will work. If they want to live here permanently, then they should get in line. No amnesty for illegals though. If they do not learn to speak English and reside here illegally, they will never get ahead. Although some want to pit blacks and Latinos against each other for low-end jobs, such positions should not be an ultimate goal.

The Senate just passed immigration legislation. Now the House needs to help solve this problem before the elections recess. Let's put a Statue of Liberty on the U.S./Mexico border and huge processing facilities to manage legal immigration and guest workers. Mexican Americans and Mexicans are vital to our vibrant sustainable economy. In order to maximize the environmental benefits of their pursuits of the American and Mexican dreams, we need a predictable process that will be positive for everyone. Does anyone know why NAFTA didn't solve this problem?
Posted by Norris McDonald at 9:06 PM