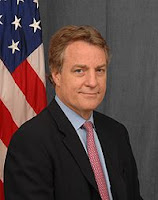 With Interior Secretary Salazar’s Chief of Staff, Tom Strickland, right, and Blacks In Government [BIG] Department of the Interior Chapter’s President, Kim Lambert, leading the discussion, Interior representatives and a delegation of BIG chapter officers met on Tuesday afternoon, July 13th. Taking sharp issue with current Interior policies, BIG has found continued under representation of minorities and policies that deny equal opportunity in a fall White Paper entitled “Critical Personnel Issues Affecting Black Employees in the Department of the Interior”. In response to BIG’s findings and recent discrimination findings by others, Interior outlined a series of changes and time frames at the meeting. Key among those changes now pending are:

· Pronouncement of a Diversity Vision Statement by Secretary Salazar this month;
· Memorandums to Assistant Secretaries and Bureau Directors on execution of the Secretary’s Diversity Initiative;
· Linking senior executives performances evaluations and awards to the successful implementation and progress of diversity and inclusion initiatives;
· Removal of barriers to diversity and inclusion, including incumbent individuals who’s self-interest and belief are obstacles;
· Clear definition of what Interior and its Bureaus and offices expect to accomplish;
· Submission of monthly statistical progress reports through deployment of the eVersity Software package;
· Institution of quarterly diversity performance briefings to the Secretary;
· Identify bureau regional diversity change agents and establish a cadre of fully committed Interior stakeholders to lead by example; and,
· Start recruitment from Historically Black Colleges & Universities.

According to Kim Lambert:

“It’s a start. Now we have to see if Interior can dramatically change direction. Our latest numbers show increasing discrimination at Interior over the past year. A court case settled this month allows an Office of the Solicitor’s supervisor to continue his employment at Interior despite calling his black staff “monkeys." I never thought I would even think it, but right now we might have been better off under Bush. Somehow the Department’s Assistant Secretaries and senior staff must embrace diversity not just at the top. Why they have chosen to insulate themselves with this father-son network of good old boys that gave us the Gulf oil spill oversight failure and Blacks are monkey’s mentality stretches my capacity to understand. Secretary Salazar must act decisively, effectively and immediately or Interior will have been ethnically cleansed on his watch.”

BIG Interior’s delegation was informed that a follow up meeting will take place in two weeks with more details on implementation of the action items outlined this week. (CapitalWirePR, 7/15/2010)
Posted by Norris McDonald at 8:09 PM