Last year, California Gov. Jerry Brown (D) diverted half a billion dollars from the auction of carbon dioxide permits to bolster the state's financial reserves.  Brown wants to keep the lion's share of the money for at least another year.  Of course, $600 million of cap-and-trade money would still go for renewable energy, energy efficiency and other carbon-cutting programs.

The money will go toward energy efficiency retrofits and solar installations for low-income communities, low-carbon transportation, transit-friendly planning and other programs. Brown is expected to propose a budget of $154.9 billion.

Brown plans to return $100 million of the $500 million he borrowed last year from the cap-and-trade account, which is projected to grow to $850 million over the next fiscal year as the state continues its economywide carbon trading system. 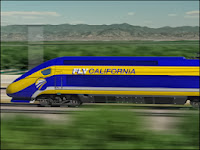 Brown is also proposing to spend nearly a third of the expected proceeds on high-speed rail.  The rail line, which is scheduled to connect San Francisco to Los Angeles by 2028 at a cost of $68.4 billion,

Brown appears to be complying with a bill he signed in 2012, S.B. 535, which reserves 25 percent of the market's proceeds for projects that help communities with low income, high unemployment, low levels of homeownership or other economic disadvantages.  (E&E Publishing, 1/9/2014)
Posted by Norris McDonald at 9:46 PM