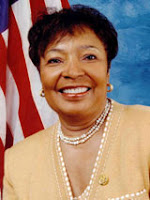 CNN should be ashamed of the way that Anderson Cooper handled the interview with Texas Congresswoman Eddie Bernice Johnson (D-TX). He aired the interview on Thursday, and because it seemed to catch the congresswoman sounding vulnerable, he aired it again tonight. Congresswoman Johnson stated that she reimbursed the $21,000 in scholarships that were awarded to her grandkids. Anderson was not satisfied with that and proceeded to essentially abuse the Congresswoman as she tried to explain the situation. It is clearly 'open season' on Congressional Black Caucus members.

Congresswoman Eddie Bernice Johnson does not serve on education committees in the House of Representatives but has gone out of her way to aggressively promote educational achievement by minority students. We have attended events organized by the congresswoman to raise awareness and funding for scholarships for needy students. Anderson Cooper's conduct was unconsciousable and he did seem to be 'creating a scandal' where none exists.

We know that Congresswoman Eddie Bernice Johnson will remain strong in the face of this 4th estate abuse from The Left. We salute you Congresswoman Johnson, for we know about your work. And why hasn't the media been out covering your hard work in promoting educational achievement for minority kids. Where was Anderson Cooper in promoting all of Congresswoman Eddie Bernice Johnson's great works in this area? It simply is not fair and represents an abuse of freedom of the press.
Posted by Norris McDonald at 10:20 PM