Stephanie Owens, left, has replaced M. Allyn Brooks LaSure as Deputy Associate Administrator in the Office of Public Affairs. Owens was Director of the Office of Public Affairs. Owens was formally the senior vice president of The Agency LLC, a consulting firm specializing in the development of corporate social responsibility strategies. Her clients included the National Football League and Major League Baseball. She also served as the Vice President of Collaborative Initiatives for the American Cancer Society, Special Assistant to Vice President Al Gore for the Federal Interagency Task Force on St. Petersburg, Senior Advisor to Commerce Secretary Ron Brown and Special Assistant to Secretary Henry Cisneros. Owens is a graduate of the University of Southern California and native of Detroit, Michigan. Adora Andy, right, who was EPA Press Secretary has also been elevated to Deputy Associate Administrator for Communications in the Office of Public Affairs. Andy was a television News Producer at WPTY in Memphis for two years. Prior to that, she was a producer and reporter in Columbia, Missouri. Andy served as Press Secretary for Congressman Harold Ford, Jr.'s U.S. Senate Campaign in Nashville, Tennessee. She was Public Information Officer for the DeKalb County District Attorney's Office. Andy also has news experience at CNBC Europe in London. Andy was born and raised in San Antonio, Texas and graduated from the University of Missouri's School of Journalism. 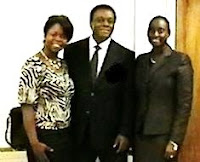