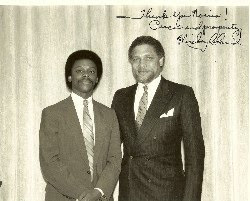 Today the CBC hosts five or six energy and environment braintrusts during the Congressional Black Caucus Foundation Annual Legislative Conference. 'In the old days,' they actually held the sessions in Congressional hearing rooms. Now the sessions are held at the Walter E. Washington Convention Center in downtown Washington, DC.

Congressional Mickey Leland hosted the very first energy and environment braintrust on behalf of the CBCF in 1982. He reached out to our president, Norris McDonald, to organize the session for him. It turned out to be a very successful session and now there are numerous such sessions sponsored by the CBCF. But everyone should remember that the late Congressman Mickey started it all.

The American Association of Blacks in Energy coordinated a reception after the session. It provided for a great networking opportunity at that time. Larry Irving was Congressman Leland's Legislative Director and Counsel at that time. Larry went on to head of the National Telecommunications Infrastructure Administration (NTIA), an agency of the United States Department of Commerce. In 2009, Larry became Vice President of Global Government Affairs for Hewlett-Packard Company, the largest technology company in the world.

Mickey is a legend. And those who met him and got to know him will never forget him.
Posted by Norris McDonald at 3:32 PM