"Africa: Up For Grabs: The Scale and Impact of Land Grabbing for Agrofuels" 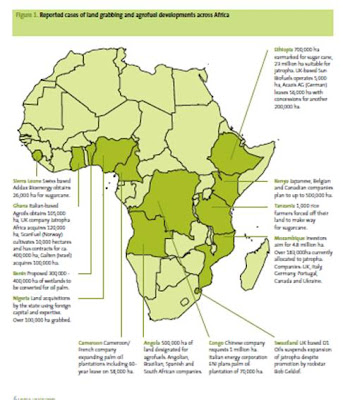 The African continent is increasingly being seen as a source of agricultural land and natural resources for the rest of the world. National governments and private companies are obtaining access to land across the continent to grow crops for food and fuel to meet growing demand from mainly overseas countries. Agrofuels - the large scale production of crops used to produce liquid fuels - are being hailed by some as Africa’s silver bullet.

Proponents of agrofuels generally argue that agrofuel production will address the economic crisis facing many developing countries; they will create wealth and jobs and alleviate poverty. These issues need to be assessed objectively. We should not accept these arguments without subjecting them to empirical analysis. The rationale behind this research is anchored on this premise. It looks at the spread of agrofuel production across Africa and highlights the social, economic, health and environmental concerns found.

Many of the host countries have encouraged this investment, keen to develop a potentially lucrative export crop. Fifteen African nations joined forces to set up what has been described as a “Green OPEC” and a number of national governments have also introduced domestic targets and strategies for agrofuel use at home. But there is also a growing awareness of the downsides of this agrofuel boom. As scientists and international institutions challenge the climate benefits of this alternative fuel source, local communities and in some cases national governments are waking up to the impact of land grabs on the environment and on local livelihoods.

FOE's Recommendations for action: 1. Put a brake on land grabbing: a) Stopping the drivers – political targets that increase demand for agrofuels should be scrapped, in particular the EU’s mandatory target and b) African states should immediately suspend further land acquisitions and investments in agrofuels.
Posted by Norris McDonald at 8:37 AM