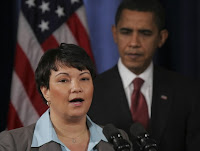 Before becoming EPA Administrator, Jackson served as Chief of Staff to New Jersey Governor Jon S. Corzine. Prior to that, she was Commissioner of New Jersey’s Department of Environmental Protection (DEP). While Commissioner, Jackson was known for her advocacy for reducing greenhouse gases, aggressively addressing pollution, and having an open and honest dialogue with stakeholders in the public policy process. Jackson’s tenure was also noted for ensuring that underserved communities received fair environmental protection under the law.